A Welcome from the President 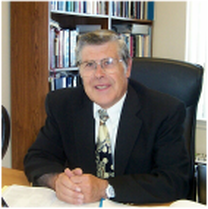 ​I want to extend a word of welcome to all who have taken time to visit the Shasta Bible College & Graduate School website.  Whether you are a prospective student, an interested parent or grandparent, a pastor or Christian leader looking for a Biblically trustworthy institution to recommend, you should know that our faculty members and administrators are both academically qualified and experienced in a variety of church-related ministries.  But more importantly, they are committed to the only consistently reliable source of truth, the Word of God, which is our final authority in all areas of our curriculum.  We believe it is inspired (breathed out) by God and inerrant in the original autographs. We interpret it according to the literal, historical, grammatical method, taking into account context and figures of speech; and we are dedicated to teaching it, modeling its precepts and applying its life-transforming message to both life and ministry.

Our priority is to cultivate a campus atmosphere conducive to spiritual growth coupled with academic excellence and compassion for the souls of men and women.  Our passion is to mentor and mold future servant-leaders who will impact their world for Christ.  Our purpose is to produce Ephesians 2 Christians for such a time as this who are not only vertically reconciled according to Eph. 2:4-6, but also horizontally reconciled with fellow believers of all races and ethnic backgrounds through the atoning work of our Lord and Savior, Jesus Christ on the cross as illustrated in Eph. 2:11-19.

I invite you to explore the superb educational possibilities available to you here at Shasta Bible College & Graduate School.  We are fast approaching our 50th Anniversary (Jan. 2021) and we are grateful to God for the hundreds of alumni who are now serving Christ across the nation and around the world.  We would love for you to consider being part of our campus family.  It’s easy to apply.  Just click on the APPLY tab located on the home page of our website and follow the prompts.  Questions?  Feel free to phone our admissions office at (530) 221-4275 or toll-free at 1-800-800-4SBC.

To educate and equip Biblically committed Christian leaders who will impact the world for Jesus Christ.

The institution’s origins date back to 1970 when God laid it upon the heart of Dr. Royal D. Blue to investigate the possibility of initiating an evening Bible institute extension from Multnomah School of the Bible, utilizing the facilities of North Valley Baptist Church. While speaking at Multnomah's Spiritual Life Conference, Dr. Blue met with Dr. John Mitchell, Dr. Willard Aldrich and Mr. John Grunland (director of the evening school) concerning the possibility of bringing an extension program to Redding. Several weeks later, Dr. Aldrich and Mr. Grunland flew to Redding to meet with Dr. Blue and other pastors in the Redding area who were burdened to make Bible institute courses available in the Northern California area. The need for such a program was evidenced by the increasing demand on North Valley Baptist Church to supply young pastors to minister in area churches which lacked qualified leadership, thus an extension program was initiated which subsequently developed into the Northern California Bible Institute (NCBI) with Rev. Hubert Garland as its first part-time Executive Director.

A second stage of growth came under the direction of Dr. Oran Smith who was called as NCBI's first full-time Executive Director. It was under Dr. Smith's leadership that the day program was begun in addition to the original evening Bible Institute. During these years NCBI flourished and extension centers were developed in Susanville, Weaverville and other surrounding population centers. Following the home-going of Dr. Smith, Rev. Don Lamberson and Rev. Lynn Pace assumed the leadership followed by Mr. Roger Martin under whom NCBI became independent in 1979 with its own Board of Directors and committees composed of concerned Christian leaders and laymen. Following the resignation of Rev. Martin to enter church ministry, Dr. Charles Shoemaker was called as Executive Director. During Dr. Shoemaker's tenure NCBI's first buildings were erected and the institution was authorized to grant degrees by the California State Board of Education. On January 1, 1982, NCBI officially became known as Shasta Bible College under the leadership of Dr. Gordon Rasmussen who was called as President following the resignation of Dr. Shoemaker. Under Dr. Rasmussen's administration the Oran Smith Building was completed and steps were taken to move the College toward accreditation with the American Association of Bible Colleges.

In July of 1985, Dr. David Nicholas was selected to assume the presidency. Coming from a background of experience in both pastoral ministry and Christian higher education, Dr. Nicholas led in the broadening of SBC&GS’s curriculum, initiated a daily radio Bible teaching broadcast known as Truth for Today, led SBC&GS in sponsoring the annual Greater Redding Area Church Enrichment Convention (GRACE), the Alpha and Omega Conference on Creation and End Time Prophecy. He also began an aggressive pursuit of institutional accreditation. In 1997, accreditation with the Transnational Association of Christian Colleges and Schools (TRACS) was attained. TRACS is the only Christian accrediting agency approved by the U.S. Department of Education to accredit both undergraduate and graduate institutions. TRACS is also approved by the Council on Higher Education Accreditation (CHEA). Consequently, Shasta Bible College and Graduate School is now listed in the publications, Accredited Institutions of Postsecondary Education (consulted by all accredited institutions to determine transfer credit eligibility), and the Higher Education Directory, which lists all USDE approved institutions and accrediting agencies. Shasta Bible College and Graduate School is also approved by the Association of Christian Schools International to offer classes and programs leading to ACSI Certification.2012-2013 - Shasta Bible College and Graduate School (Summer 2012 revision)

The campus is located on 55 acres three miles east of downtown Redding. Presently, two sixplex student resident halls provide housing for students.  Oran Smith Hall houses the Student Services offices, the Welcome Center, the Chapel, and the Student Lounge. The Faye Messler Library is located on the ground floor of the Jack M. Hicks Learning Resource Center along with a unique Creation Museum featuring fossils, artifacts and other geological evidences supporting the Biblical account of creation a world-wide flood. Additional classrooms, faculty and administrative offices and The Robert G. Nicholas Evangelists’ Hall of Fame are located upstairs on the second floor.

Today, over 60% of Shasta Bible College and Graduate School graduates (male and female) are active in some form of vocational Christian service. 80% of SBC&GS’s graduates either enter some form of church ministry or go on for graduate seminary work. Thus far, nearly 90% of SBC&GS’s Christian teacher education graduates have been placed in Christian schools. Recently, a number of SBC&GS alumni have been accepted for missionary service with mission organizations including the Association of Baptists for World Evangelism (ABWE), Evangelical Baptist Missions, Village Missions, and American Missionary Fellowship. In addition, SBC&GS alumni are pastoring churches affiliated with the General Association of Regular Baptists (GARBC), Conservative Baptist Association of America (CBA of A), The Independent Fundamental Churches of America (IFCA), The Southern Baptist Convention, and various other independent Baptist, Community and Bible churches. SBC&GS also has alumni serving as military chaplains in the armed forces.


NATIONAL ACCREDITATION
Shasta Bible College and Graduate School is a member of the Transnational Association of Christian Colleges and Schools (TRACS), [15935 Forest Rd, Forest, VA 24551; Telephone: 434.525.9539; email: info@tracs.org] having been awarded Reaffirmation II of its accredited status as a Category III institution by the TRACS Accreditation Commission on November 6, 2012. This status is effective for a period of 10 years. TRACS is recognized by the United States Department of Education, the Council for Higher Education Accreditation and the International Network for Quality Assurance Agencies in Higher Education (INQAAHE).

STATE APPROVAL
Shasta Bible College and Graduate School is approved under the provisions of the State of California Education Code, Bureau for Private Postsecondary Education. “Approval” means compliance with state standards as set forth in the Ed. Code.
Any questions a student may have regarding this catalog that have not been satisfactorily answered by the institution may be directed to the Bureau for Private Postsecondary Education at 2535 Capitol Oaks Drive, Suite 400, Sacramento, CA 95833, www. bppe.ca.gov, toll-free telephone number (888) 370-7589 or by fax (916) 263-1897.
A student or any member of the public may file a complaint about this institution with the Bureau for Private Postsecondary Education by calling (888) 370-7589 toll-free or by completing a complaint form, which can be obtained on the bureau’s internet web site www.bppe.ca.gov.
No degree or certificate offered at Shasta Bible College and Graduate School leads to any state licensure, certification or credential.
For transferability of credit to other educational institutions, see Admissions/Records Policies.

ACSI APPROVAL
SBC&GS holds membership in the Association of Christian Schools International (ACSI) and is approved to offer courses towards ACSI Teacher Certification.